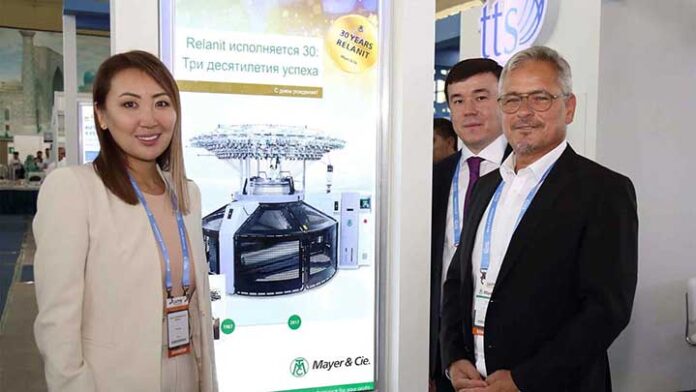 Circular knitting technologies specialist Mayer & Cie. attended CAITME 2022 with its representative Textile Technologies & Services LLC on September, 11-13 to meet the textile market in and around Uzbekistan. The long-standing Mayer & Cie. representation under the direction of Anna Tsoy received an award for the best stand design. Although, it is stated that their influx was lower than expected because of a parallel fabric fair in Moscow, which many local textile entrepreneurs used to present themselves to their customers.

The demand for Mayer & Cie. machines continues in Uzbekistan
Although a lower visitor number than they expected, Mayer & Cie. was able to record the CAITME as a rewarding industry event. The company was able to complete a machine order and prepare more directly on site. Timo Schramm, Sales Manager of the circular knitting machine manufacturer Mayer & Cie., said that they see continued demand for their top sellers, especially the Relanit 3.2 HS, in Uzbekistan.

The highly productive circular knitting machine for single jersey knitted fabrics began its success story in Uzbekistan a few years ago. Schramm noted: “Our local customers have recognized that investing in a premium machine is worthwhile. It is popular in the industrial frame for bales of goods up to about 160 kilograms.” The advantages of the Relanit 3.2 HS include its productivity and reliability in the processing of elastomer yarns.