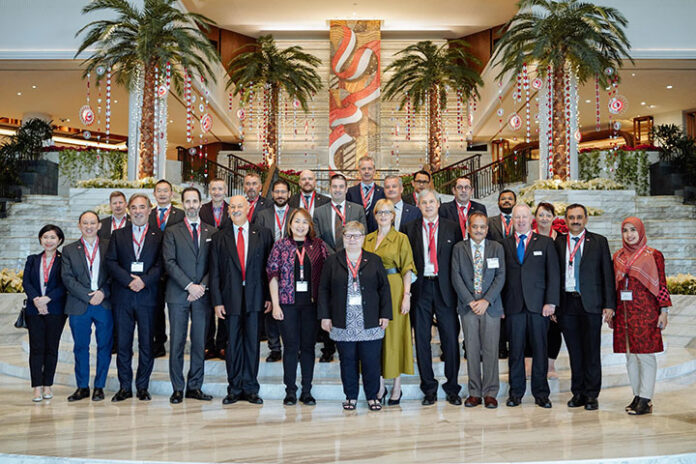 The time is right for Swiss textile machinery companies to grow their export business with Indonesia – one of the world’s top 10 textile producers. A free trade agreement between the two countries came into force in 2021, and market analyses show that there is scope for a significant increase in business in textile and textile machinery sectors.

This was the background to a successful symposium in the Indonesian capital Jakarta last month when Swiss Textile Machinery Association members presented their market and innovations to an invited audience of 200 delegates from Indonesian textile companies.

The symposium audience was welcomed by Philippe Strub, of the Swiss Embassy in Indonesia; Ignatius Warsito, from the Indonesia Ministry of Industry’s Chemical, Pharmaceutical and Textile Industry branch; Anne Patricia Sutanto, of the Indonesian Textile Association (API); and Ernesto Maurer, President of the Swiss Textile Machinery Association.

The presentations were followed by panel discussions with speakers, and there were also networking opportunities at the companies’ exhibition tables.

Also taking part in a panel at the event was Testex, the independent Swiss organisation which provides testing, certification, OEKO-TEX® and other labels for the textile industry. Discussion focused on the relevance of innovation in textile technology to sustainability and ‘saving the planet.’

Recent years have seen an acceleration in trade relations between Switzerland and Indonesia, which in 2008 was classed as one of eight priority countries for economic development cooperation by SECO, the Swiss Secretariat for Economic Affairs, with a joint economic and trade commission established the following year.
Collaboration was heightened further in 2018 with a Comprehensive Economic Partnership Agreement (CEPA) for Indonesia with Switzerland and the other EFTA countries. This more extensive form of free trade agreement was accepted after a popular referendum, and ultimately came into force in November 2021.

Trading between the two countries is supported by SERV, the Swiss export risk insurance organisation. This insures export goods against political and commercial risks and facilitates credit.

Cornelia Buchwalder, Secretary General of the Swiss Textile Machinery Association, said the Indonesia Symposium was ideally-timed, right after the CEPA came into effect: “With the free trade agreement in place, there is even greater potential for the development of trade between our countries,” she said.

“Business in textile and textile machinery is actually below the relative market shares for the sectors, so this stronger cooperation is probably overdue. It was a successful symposium, with enthusiastic participation from Indonesian textile companies, so we are optimistic about future export prospects for Swiss textile machinery.”
Source: Swissmem